A Change of Seasons

Council and the Council Aides [Average Score of 21]
Taking inspiration from the Jeoujian traditions of servitude, and suggested by Adrian Schalice, the Council and their aides settled on a traditional Maid Cafe to show the people of Nytt that it is the Council that serves the people’s needs, and not the other way around. The Display is a big hit among the people, most specifically focusing on Councilor Cadenza Anam and Council Scribe Adrian Schalice, both of whom showed up with a world-class understanding of the art. Their Jousting Tournament draws attention from few, but the crowds set to watch more than make up for it. Their Display is seen as the best among Nytt, if only barely. [+1 to all Rolls for the next Two Missions for all Council Aide Members]

Recon Corps and the Corpsmen [Average Score of 19]
Deciding to spread their talents around, the Recon Corps showed up with several plans and ideas, ranging from scenic Wagon rides around the Edenic Coastline by Cervino-driven charters, to a spirit-raising Bonfire as the sun set. In addition, their members provided security to the outlying areas, most specifically around their well-received and highly popular Shooting Gallery. Their combined displays net them second place in popularity among Nytt. [One Free Reroll, to be used whenever desired down the line]

The Historical Reclamation Society and their Impromptu Acting Troupe [Average Score of 18]
For the one year anniversary of Nytt’s founding upon Edenecho, the HRS comes ready to play up to their namesake, and puts on a 3-act play detailing an important moment in Edenic history that took place during the Zodiac Pantheon’s own trials. The play is received with middling results, though all agree that Giorgio Nilarask (Playing the lead role as Akte-Hale) carried the show as best he could. Even though the HRS didn’t wow many new fans, those that came to watch still learned a bit of religious history, and got fliers to engage in the much better received scavenger hunt that came afterward, themed after the members of the Zodiac Pantheon. [Knowledge: Religion checks on the Zodiac Pantheon can now be done Untrained.]

Total Time Passed: A Week of Planning and a Festival Day/Night (8 Days)

The day and night of the Starlight Festival has finally arrived, and all common citizens agree that the spectacle was well worth the wait. A few among their number even settle on joining Factions of their choice at the conclusion of the night, much to Hollylynn’s disapproval. She instructs them to come back in the morning, or more preferably (after one too many ciders) the afternoon.

Many spend the days with people they hope to court or foster closer friendships with, and the seeds of progress are planted. As the night winds down to an end at the Beachside Bonfire hosted by the Recon Corps, three things are brought to the attention of those still attending.

The Historical Reclamation Society discloses (a bit drunkenly on the behalf of Captain Tanropi) that Recon Commander Bowlt has found the next Trial Site in the so-called Golden Hills region on the other side of the Forest. Many glory-seekers nod approvingly, and make plans to head out with the HRS when they take their initial dive.

The Recon Corps unveils their final surprise; A time capsule of sorts, alchemically treated to not wear down or fade over time. They ask of the people of Nytt to place things in the chest; Belongings, donations, or anything else they’d like for future generations to find in time. The idea is extremely well-received among those still at the bonfire.

Finally, the Council Aides, headed by Roy Djinnkin, call for the fruits of their labor to be brought out and raised up high. 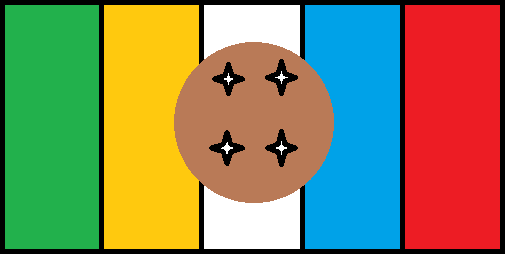 The Flag that will represent the spirit of the Expeditions. The Flag of Nytt, made to symbolize the five nations of the world coming together to prosper upon this new land. Now with an official banner to finally gather under, the people cheer, as Councilor Amphirite Fizzlewake and Adrian Schalice move off to the side to being shooting colorful fireworks off into the clear night sky, illuminating the waves and entertaining the masses (though startling those who had tried to take an early night). It marks an official end to the night of festivities, though many still continue on until they collapse from exhaustion.

Overall, the Starlight Festival is seen as an absolute success due to the work put in by all the members of the Factions. As a beautiful crimson sun rises from the east in the early hours of the morning, those still left awake feel a renewed sense of hope and strength. Surely, the coming year would be one of forging a more glorious future through the wild lands of Edenecho.

One Bourbon, One Scotch, One Bear She'll have your results by next Fireday

Solitaire A Man who could have Ruled the World