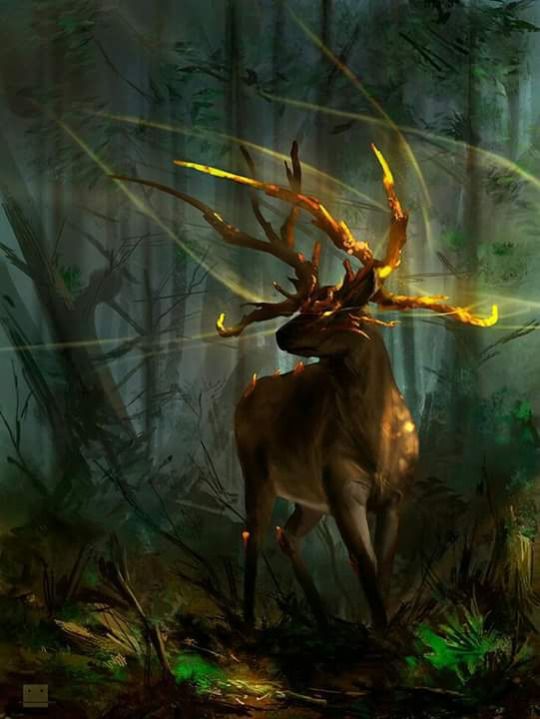 First discovered near a set of coastal cliffs after following a rumor from an eccentric member of the HRS, the Cervinos (more commonly known as ‘Edenelk’), have displayed a natural affinity for blending into natural surroundings when left to their own devices. When raised by another species, such as the humanoids of Nytt, the Cervinos have proven capable of learning very different sorts of magicks, seeming to imprint on the ideals that their partners/owners impart upon them.

It is believed that, although the Cervinos are not water-based creatures by any means, they tend to congregate around coasts and bodies of water for the opportunity to snack upon a special strain of Edenic Horseradish, a very potent type of root vegetable that only grows near water. This has led to their status as prey for larger, more aggressive species that live in or around such areas.

Special Abilities
Symbiotic Imprinting
Depending on the nature of which the Cervino is raised, it will develop magical abilities in accordance with the lessons it has been taught, either by the dangers of nature leading to a natural cloaking ability, or the teachings of a higher race to lead one into battle with evoking and transforming magicks.

All Bonded Cervinos count as a level 1 Companion, regardless of Class choice. If you have a Class Feature or Feat that grants you access to an animal companion, you may progress as follows at the levels below, and give a +1 to one Core Stat on the Cervino.

Ascendant campaigns can view previous versions of their pages, see what has changed (and who did it), and even restore old versions. It's like having a rewind button for your campaign.

We've already been saving your edits, so if you upgrade now you will have instant access to your previous versions. Plus, you get a 15-day free trial, so there's nothing to lose.